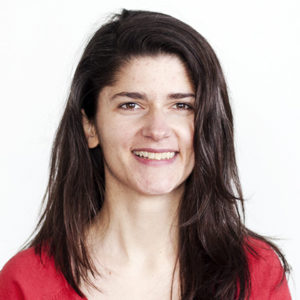 Nina Adamopoulou is an actress that lives and works in Athens. She has completed her acting and theatre studies in 2004 at the Contemporary Theatre of Athens of G.Kimoulis. She later participated extensively in ballet and contemporary dance lessons, Butoh dance and Alexander technique lessons as well as vocal and singing lessons to cover her need for a wider knowledge concerning theatre. She has also participated in numerous Physical and Devised Theatre workshops that really affected her work.

In theatre she has worked with many theatre companies as well as being a member of a theatre group creating its own performances with a more experimental way. She has also performed in English and German for a children’s productions that travelled in schools around Athens and Greece. For nearly 15 years she has been working in the education field teaching Drama in kids and adolescents. Lately she has been leading workshops for teachers and educators on how to use creative teaching methods in the classroom. 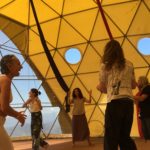 The Humourous Self Within Us: A Theatrical Workshop
July 7, 2021

REGISTRATION OPEN! Good fortune will always visit a house that laughter exists. – Japanese quote Humour, I think, is ingrained in all of us. Especially if we think that humour can be considered a key mechanism of preservation in difficult and awkward moments. It is believed that people with a strong sense of humour have survived a series of difficult situations. However, humour is also a creative choice on how to see life. Simply because it gives you the opportunity…