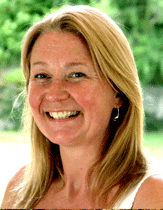 Lucy has been working in private practice as a relational psychotherapist for over 20 years. She works with individuals, couples and groups and runs workshops which combine embodied movement and a holistic body-mind therapeutic approach. She holds an MA in Humanistic and Integrative Psychotherapy, has trained in Somatic Trauma Therapy with trauma specialist Babette Rothschild and has an Advanced Diploma in Embodied-Relational Therapy which has emerged from Reichian bodywork and body psychotherapy. Her approach is also influenced by the embodied movement practices of Dance of Awareness™ which she is licensed to teach, as well as 5 Rhythms dance™. She lives with her husband and two teenage sons in North East Scotland where she has been involved in the Findhorn Foundation and its wider community in a variety of roles for many years.