Out of its small beginnings as a single Findhorn Foundation inspired holistic centre at Anilio, Pelion in 2001 founded by three Findhorn open community members, Kalikalos has grown over the past 15 years to a network of three autonomous campuses sharing resources and a common vision, each with its own distinctive environment and energy.  Run by a partnership of three non-profit educational organisations, Kalikalos Holistic Centres are dependent on and indebted to the energy given by our dedicated volunteers, and to the donations of supporters like you! 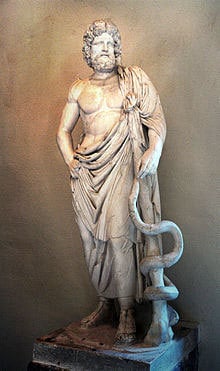 The demigod of Medicine, Asclepius & his serpent staff

Unbeknown to its founders when they began at the beginning of this century, Kalikalos has been guided to incarnate an ancient healing tradition that existed in this region over two millennia ago. Led by Ascelpius, the founder of our western medical tradition who, Greek mythology tells us, was educated by Cheiron Centaur the wounded healer, Pelion became the epicentre of dozens of centres where people came from far and wide to be healed through fasting and dream analysis.

In the spirit of our parent-companies we at the Kalikalos Holistic Network aim to benefit local and global  communities by holding the space for an immersive experience in holistic education at an affordable price. At Kalikalos participants learn and demonstrate a sustainable culture of interdependence. After 15 years of building this network from the ground up, we now are poised for a new level of expansion, a round of development which will only come to fruition through the support of your generous gifts and grants.  At the same time, we operate in a country hamstrung by the austerity measures imposed by the European Central bank which has impacted the infrastructure we depend on (flights to our nearest city of Volos have been sharply cut) and tourism to Greece in general.

If our vision resonates with yours, please consider supporting the Kalikalos Holistic Network as a bronze, silver or gold sustaining supporter with a yearly subscription.

One off donations are also very welcome to our scholarship/bursary fund which allows individuals for whom it would be otherwise impossible due to their financial circumstances  to come to us and benefit from our programs. Donations are also most welcome to support staff stipends for our long term volunteers who return year after year with little or no financial compensation. Currently we are also soliciting donations to allow us to purchase a property in Lanzarote in order to expand our programmes to the winter months.

Please use the non-profit justgive.org button below (or aim your smart phone at the QR code) for either one-off or sustaining contributions.

Donate and Support Us Now

Bronze sustaining doners (€500/year) get 10% off most Kalikalos programmes

Silver sustaining donors (€1000/year) get 15% off most Kalikalos programmes

Gold sustaining donors (€2000/year) get 25% off most Kalikalos programmes.