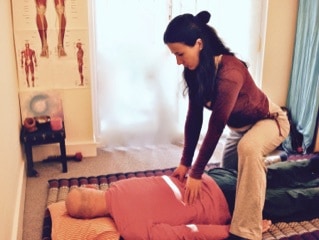 Traditional Thai Yoga Massage from the North of Thailand is an ancient healing art, which has been handed down since the third century BC. It originated from the place where Yoga, Ayurveda and Buddhism evolved together and it was never seen as just massage but as a spiritual practice, a part of a wider inquiry.
Thai Massage addresses and combines techniques usually found isolated in the western physiotherapies including Trigger Point Treatments, Myofascial Techniques, Neuro Muscular therapy, and Manual Therapy among others. The combination of energetic and physical aspects is what makes Thai Massage unique and so effective. Traditional Thai massage is really a deep, full-body treatment, starting at the feet and progressing up to the head. Using a sequence of gentle, flowing exercise movements, the recipient’s body is moved, loosened and stretched (some stretch applications linked to Yoga) of the joints and the muscles. This unique type of massage influences the energetic side as well, restoring the flow of energy throughout the body with applied acupressure on the sen energy lines of the body, aimed at harmonizing and energizing. It is worked on a floor with the client dressed in comfortable loose clothing. Thai method uses mainly point pressure and muscle stretching. And it is not just the hands that are used to free tension stored in the recipient’s body, but the feet and elbows are used as well.

Focusing sessions, a psychotherapeutic process developed by psychotherapist Eugene Gendlin. It can be used in any kind of therapeutic situation, including peer-to-peer sessions. It involves holding a kind of open, non-judging attention to an internal knowing which is directly experienced but is not yet in words. Focusing is learning to trust your own inner sense of things. It is the conscious interaction with our bodily felt knowing that allows a natural unfolding of our innate felt knowing. Historically, Focusing arose out of the work of Gene Gendlin. It was originally conceptualised within the psychology of Carl Rogers, but since then (1960’s) has been integrated and applied to many other areas of life including problem solving, personal growth & spirituality, and all forms of creative expression. There is no diagnosing or analysing or counselling, just listening, describing and gently attending your inner experience until it reveals its meaning and you see a way forward that you didn’t see before. That’s what Focusing is. Its the experience of waking up your inner knowing, aligning with the inside and living from it more deeply and authentically.:http://www.yogatree.org.uk/Focusing.html

“Your body is not a machine, rather a wonderfully intricate interaction with everything around you,
which is why it “knows” so much just in being”
~ G. Gendlin

Halina Roszenstrauch  is practicing Sivananda and Iyengar Yoga since 1999. Her yoga practice and teaching has been inspired by Gene Gendlin’s Focusing practice, Somatic Psychology and Ayurveda. Also Yin yoga and Vanda Scaravelli approach to yoga.

She calls herself blessed to have been able to learn from teachers like Richard Miller, Donna Farhi, Judith Hanson Lasater, David Frawley Alan Finger, Paul Grilley and Angela Farmer who have been influencing my practice and teaching.
In 2008 she opened Yoga Tree school in Rickmansworth, near London and have been sharing yoga practice through weekly classes, workshops and retreats. You can find more information on www.yogatree.org.uk near